skip to main | skip to sidebar

1964 MFG
Pourable Transom Repair
paragonfl2@aol.com
I had purchased this boat several years ago and spent quite a bit of
time polishing and buffing before I realized I would have to replace
the transom. It seemed solid at first, but anticipating installing a
larger motor, I wanted to be certain of it's soundness. I removed the
aluminum cap or extrusion and drilled some test holes into the core.
The bit brought up water and mush!

I knew I did not have the skill to replace the wooden core inside this curved transom, so I began
looking at alternate methods. I found a product called Seacast and read several articles and
talked to people who had used it. I even obtained some left over material from a friend and
did a simple repair on a small john boat transom. I was not happy with the results and decided
not to pursue this avenue for my boat.

While searching the internet one day, I found a product called Nida-Core and after talking to
the company and reading several 'success articles', I realized this could work for me and was
a perfect medium for the dual core radiused transoms on MFG boats.

The Seacast requires you to mix large amount of cut matting and fiberglass chips and 'stuff' it
into the transom void you have created. The Nida-Core is composed of resin and microscopic
ceramic beads. Just add hardener and pour it in as you would a heavy oil. It is self leveling, leaves no air pockets and sits up like concrete. It generates a great deal of heat during the curing
to insure a good bond to the skins.

Now, for the 'down and dirty' part of the project. You have to get all of the old core our and clean
the interior of the skins down to the fibeglass. I used a 3/8" drill bit chucked into an extension that allowed me to drill down to the bottom. I found that by drilling out the center of the core, I was able to pull out large pieces of the plywood. It just takes a lot of patience, but it works.
I know some people just use a chain saw, but I wanted to preserve my thru-hull fittings (drains)
so I took more time with it. Drill, vacuum with a shop vac attached to 1.5" hose (I used my pool hose for this) and pull out the larger pieces where possible. Once it is all cleaned out, I wrapped sandpaper around a 1x2 and scoured the insides as best as I could. I then pressure washed and
let it sit out in the sun for several days with fans on it. 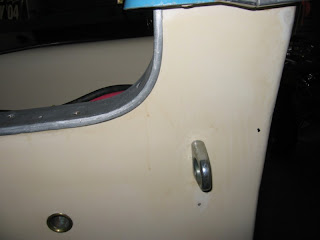 On MFG's the upper corner of the transom has
'floating blocks' that just sit on top of the core.
This is just something to screw the deck to and keep the void filled out. I replaced these with
marine plywood and cut them longer so that they
come down below the ski tow eyes. I drilled the inner and bottom edges so that the Nida would flow into and "peg" these pieces.


I wanted to make sure the transom was as level and verticle as possible, so I put the trailer tongue on the ground and jacked it up as high as possible in the rear. This allowed me to level and have a solid work platform and get the transom as verticle (front to back) as possible.

I used metal duck tape to cover my motor bolt holes from the outside and plugged them from the inside with Kitty Hair and resin soaked cloth.

I draped the inner and outer skins with plastic, cleaned up the work area and prepared to pour the material. I used a clean plastic bucket and mixed 2.5 gallons at a time. this was just to make
it easier on me as I was working alone.

Everthing went perfectly! The Nida flowed into the aft area between the floor and hull and solidly filled this area. Pouring it to the top was a snap and the whole process mixing, pouring and all took less than 30 minutes. As the material began curing, it generated so much heat that I had to leave the shop. I could feel it about 2 inches forward on the sides and maybe six inches on the bottom. this means that the Nida flowed into this below floor space and gave me a much better anchor to the rest of the hull than the original transom.

The next day I cleaned everything up, used a little Kitty Hair to fill in the quarter inch or so of void I had on the front edge of the transom. (You would have to get the transom perfectly verticle to avoid this) and screwed the extrusion back on. A little scrubbing and wax, and you cannot tell the boat has been worked on. this was a must for me, as I am not a cosmetics kind of guy. Here is the end result.

You can read a more detailed account at: www.fiberglassics.com/howto/nida 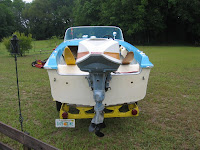 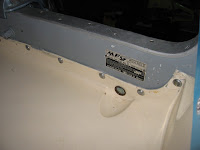 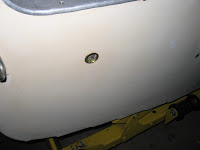